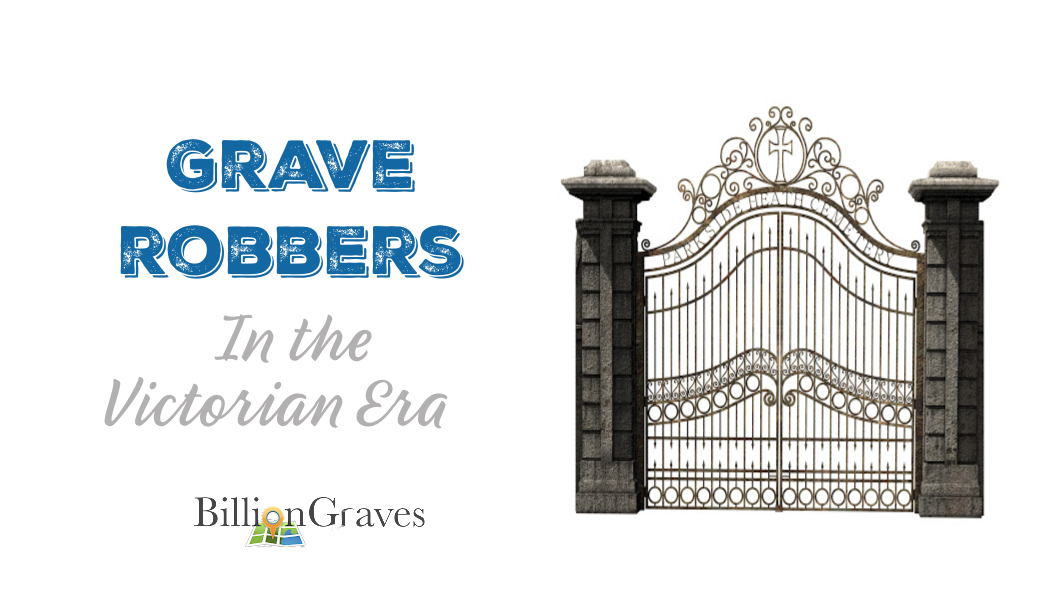 Grave robbers were a common problem in Victorian-era cemeteries. They stole everything from rings and necklaces to the bodies themselves.

“Rest in Peace” is a common epitaph on older gravestones but this wasn’t just a trite phrase in the 1800s. Family members were genuinely concerned about their loved ones’ bodies resting in peace.

So families often went to great lengths to protect their loved one’s remains after burial. Victorian families who could afford it bought metal caskets and erected iron fences.

Maybe you have seen a fence around an individual gravesite and wondered why it was there. Now, you know . . . grave robbers!

Sold to the Medical School

For centuries doctors have done autopsies and dissections to learn more about the human body.

Now before this subject makes you want to roll over in your grave, think about how grateful you are that a doctor knows what the human heart looks like before they begin open-heart surgery on one of your family members. Or how the tendons fit here and there before they help you out with some knee surgery.

Okay, but they didn’t have to STEAL the bodies, right?

But 19th-century grave robbers did it anyway! They were tempted by the money offered to them by physicians and medical schools who needed cadavers for their anatomy classes. Grave robbers were paid the equivalent of several months of workman’s wages for one body.

Studying the human body from cadavers was nothing new by the 1800s.

Leonardo da Vinci, who lived from 1452 to 1519, created hundreds of drawings of human anatomy during his lifetime. After observing and conducting dissections on corpses in hospitals and morgues, DaVinci’s incredibly detailed drawings gave insight into human mechanics and anatomy that impacted the medical field for generations.

In the 1500s, Da Vinci’s deep interest in anatomy was a rare and unique form of study. But by the 1700s, it had become more common.

In 1752, in an effort to curtail murders, the British government passed a law called the Murder Act which required the bodies of murderers to be donated for medical science or be strung up. The law began with this mandate: “in no case whatsoever shall the body of any murderer be suffered to be buried.”

As a result, medical students had a greater supply of cadavers to study (legally!) than during any previous period of history. The study of anatomy through dissection became an integral part of training for doctors and surgeons.

By 1893, grave robbing had been going on for six decades in Baltimore, Maryland before John Hopkins medical school opened. That year, the city’s seven medical schools had a mere 49 legally-received cadavers for their 1,200 students.

Well, the medical schools didn’t want students practicing surgery on live patients, now did they!? So some of them hired laborers to go to the local cemeteries, dig up bodies, and bring them back to the training centers.

And it Was Legal!

Believe it or not, it was actually legal to exhume bodies from their graves and sell them without restriction. Politicians said it was for the “public good”, lawyers were bribed to not take the cases to court, and judges turned a blind eye.

It was a strange legal twist that created this situation. Stealing bodies was not against the law but dissecting bodies was illegal.

Doctors not only continued to buy the bodies, but some who were desperate for teaching tools for their students became grave robbers themselves. (Although the term preferred by some grave robbers was the more high-browed title of “resurrectionist”.)

How Did They Do It?

In the dark of the night, with lanterns, of course.

Sometimes an entire coffin was removed with ropes, emptied, and then returned to the ground.

Most often, the end of the tomb or coffin was dug up and broken open by the grave robber. Then a rope was tied around the body and it was pulled out.

This practice was of course abhorred by the general public. So cemeteries and mourners began to take measures against the body-snatching business by installing gates, cages, and mausoleums to protect their interred loved ones.

Protecting the Coffins from Grave Robbers

By 1816, cages, better known as mortsafes, were used to protect new burials. They were made of iron and were designed to slide over the coffin and extend deep into the ground.

Mortsafes were too expensive for most families to purchase on their own so many parishes formed a Mortsafe Society. This allowed them to buy mortsafes as a group, so everyone could benefit. Each parish had two or three mortsafes on hand for when members of the society died.

“Bricking-over” a grave was a way of guaranteeing some security after death.

In 1849, at a New York state fair, Almond D. Fisk won a gold medal for his patented invention of the metallic burial case.

The main purpose of the new metallic cases was that they allowed bodies to be shipped without decomposing. But they were also used to prevent grave robbers from stealing the body.

At that time, pine coffins were going for about $2, while the new metallic cases went for $100. But the price did not deter affluent families, who were drawn to purchase the metallic cases to deter grave robbers.

By 1885, James R. Fisher was offering newly patented metallic burial cases. They even had glass windows over the face of the deceased so their loved ones could check to be sure they were still inside.

To learn more about these interesting metallic caskets, click HERE.

Yes, you read that correctly! Some grave robbers decided they could make more money by demanding ransom from family members to return the stolen bodies than by selling to medical schools.

More than 12 such body-snatching scandals were reported in 1878. An attempt was even made to steal the body of US President Abraham Lincoln.

In 1876, Abraham Lincoln’s body lay within an aboveground white marble sarcophagus in a stately tomb on the grounds of Springfield, Illinois’ Oak Ridge Cemetery. A gang of Chicago counterfeiters led by a small-time crime boss named Big Jim Kennally determined to steal his body and demand $200,000 plus a full pardon for one of their jailed buddies.

The lid of a sarcophagus was sealed but not with cement, just with less permanent plaster of Paris. The door of the tomb was locked with only a simple padlock. It could have been an easy job for them but their plan was foiled when made a mistake by inviting an undercover secret service agent, who was posing as a grave robber, to join the scheme.

High-profile grave robberies like this really put the public on edge. So inventors came up with more ways to keep remains resting in peace.

By the late 1800s, the illicit body trade was flourishing and scandalous accounts of grave robberies appeared in newspapers across the country. Some felt it was time to fight back!

So alongside the newspaper articles about grave robbers, advertisements for “coffin torpedos” were placed. The ads boasted, “Patented coffin torpedoes, for all your grave-defending needs!”

“What is a coffin torpedo?”, you might ask. Good question. It was a trap with explosives! The inventors decided that if you couldn’t prevent grave robbers from breaking into a coffin, you could at least startle them when they opened it.

Oh my! The ultimate in a practical joke.

Philip. K Clover of Columbus, Ohio, patented a unique coffin torpedo in 1878. His torpedo coffin did more than startle grave robbers, it actually harmed them. If someone tried to remove a buried body, the torpedo shot a lethal blast of lead balls when the lid was pried open.

The Stark County Democrat reported in 1881 that a “wanna-be” body snatcher, nicknamed Dipper, was killed by a torpedo coffin blast at a Mount Vernon, Ohio cemetery. It was a three-man operation. The explosion left another thief with a broken leg and the third unscathed since he was sitting in the “get-away carriage”.

Fences to Keep Grave Robbers Out

You may not have heard of exploding coffins or metallic burial cases before. But almost everyone who has visited a large cemetery has seen a fenced cemetery with a gated entry or a fence around individual gravesites. These were some of the more common ways to deter grave robbers.

Cemetery gates could be opened during the day and locked at night. Sharp pointed spires prevented grave robbers from scaling the fence.

Some cemeteries affixed broken glass to the top of cement cemetery walls to keep out grave robbers.

Some families had fences built right around the burial plot. Even a gravesite fence as delicate as this one could cause a grave robber to move on to another burial site.

Some had cement bases with iron fences on top.

The iron rusted over time but the fences were really only needed for the first few weeks after a burial anyway. Grave robbers were usually looking for the most recently interred bodies with little decay to sell to medical schools.

We have probably all seen mausoleums during our cemetery visits.

Mausoleums had a dual purpose in the 19th century. They allowed family members to pay their respects in a private setting and they also kept grave robbers away from recently interred bodies.

Some Victorian-era mausoleums even have bars on the doors. (The locked doors did a great job of keeping grave robbers out during the Victorian era but unfortunately, they also keep BillionGraves photographers out in our day!)

The End of Grave Robbery

In 1832, a law was passed in England called the Anatomy Act. It made the dissection of bodies legal for medical students.

This law, and other similar laws passed in the United States in subsequent years, made it possible for donated bodies – rather than stolen bodies – to be used by medical schools. These laws were enacted in response to a public outcry against grave robbing.

While the legal changes did help a little, it wasn’t until embalming was invented in the 1880s that grave robbing really came to an end. Embalming allowed medical schools to keep cadavers for months rather than for just a few days.

By the 1940s, cemetery fences were being torn down in England so that the iron could be melted down and used to create munitions during World War II. The fences had served their purpose in deterring grave robbers for more than a century.

Now you know more than ever about why cemeteries look the way they do! They were shaped by the times and societies in which they were created.

The next time you are at an older cemetery, look for defenses put in place by Victorian-era families to guard against grave robbers. You may be surprised how many you will find!

We need your help with taking gravestone photos to help preserve history! When photos are taken with the BillionGraves mobile app, each picture is automatically tagged with GPS coordinates.

This allows families to easily find their ancestor’s final resting place at the cemetery so they can grow their family tree. It also allows future volunteers to see exactly what has already been photographed and what still needs to be done.

If you would like to volunteer to take gravestone photos with your smartphone click HERE to get started. You are welcome to take photos of gravestones at your own convenience, no permission from us is needed.

If you still have questions after you have checked out the resources above, you can email us at Volunteer@BillionGraves.com.

Would you like to lead a group in documenting a cemetery? Email us at Volunteer@billiongraves.com and we’ll be happy to send you some great tips!