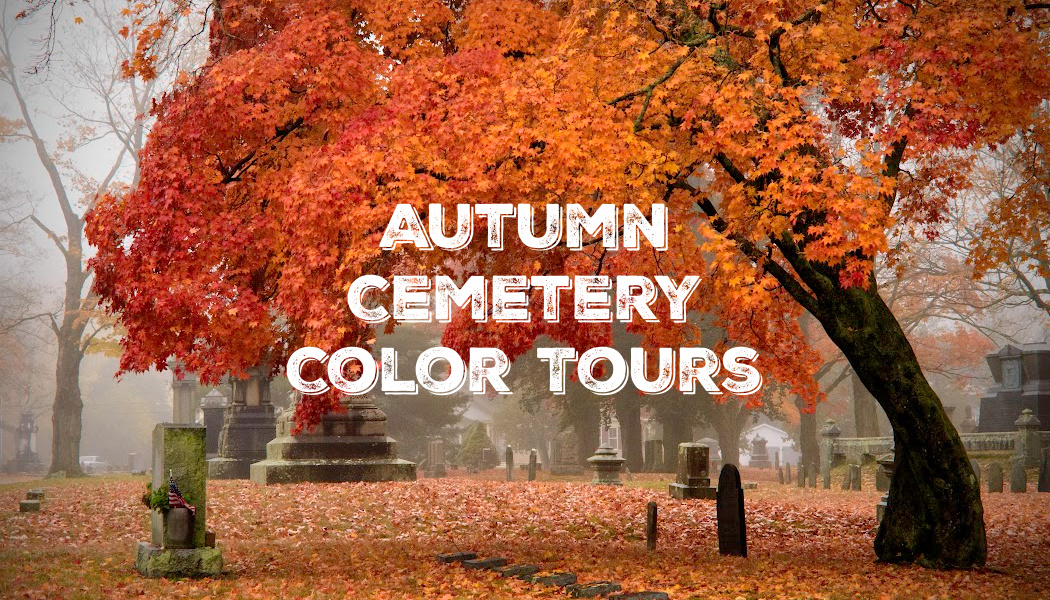 Alright, leaf-peepers, ready for a road trip!? Autumn cemetery color tours are one of the best ways to enjoy the season’s brilliant leaves. This blog post is a great way to discover some US cemeteries you can enjoy as you take gravestone photos.

Fall is a great time to take your smartphone with the BillionGraves app on the road. The leaves are changing to breathtaking reds and golds and the weather is cooler.

Combine your love of beautiful fall foliage with taking photos in cemeteries and it will be an autumn to remember!

If you would like to a make difference in the world, share data that has never yet been published, and help families connect, then download the BillionGraves app to your smartphone.

As you take photographs, they are automatically linked with GPS location pins enabling families around the globe to find their ancestor’s graves for family history and to honor their loved ones.

After your photos are uploaded, you can either transcribe them yourself or choose to have someone else transcribe the names and dates from the gravestones.

To find a cemetery that needs to have photos taken and to learn more about taking gravestone photos go to https://billiongraves.com/volunteer or email us at Volunteer@BillionGraves.com.

Cemeteries to Visit in Connecticut

Cemeteries to Visit in Delaware

Cemeteries to Visit in Georgia

I made myself a snowball
As perfect as could be.
I thought I’d keep it as a pet
And let it sleep with me.
I made it some pajamas
And a pillow for its head.
Then last night it ran away,
But first—it wet the bed.

Cemeteries to Visit in Illinois

Cemeteries to Visit in Indiana

Cemeteries to Visit in Iowa

Cemeteries to Visit in Kansas

Cemeteries to Visit in Kentucky

Cemeteries to Visit in Maine

If you think the writings of Edgar Allan Poe are strange, you should hear about his gravestone mishaps! The author was originally buried in an unmarked grave when he died in 1849.

Then, when the grave had nearly disappeared into the weeds, the cemetery caretaker had a sandstone marker placed on it- not with the famous writer’s name but just with the inexplicable number 80 inscribed.

As rumors of the neglected grave began to circulate in Baltimore newspapers, Edgar’s cousin ordered a proper marble headstone. However, while the monument was under construction, a nearby train ran off the tracks and crashed into the headstone, destroying it. Lacking the funds, Edgar’s cousin did not order another.

Years later, in 1874, community donations were gathered and a proper headstone was ordered. However, this time the engraved date was off by a day and it was too large to fit on the original burial site. Sigh.

Cemeteries to Visit in Maryland

Cemeteries to Visit in Massachusetts

You may be familiar with the 1976 ballad, “The Wreck of the Edmund Fitzgerald” by Canadian folk singer Gordon Lightfoot. It tells the tale of the ship SS Edmund Fitzgerald which was lost with her entire crew of 29 men on Lake Superior, 17 miles from Whitefish Point, Michigan. The waters near Whitefish Point are known as the “Graveyard of Ships.” Hundreds of vessels lie at the bottom of the bay.

The lighthouse on the point had been shining for nearly 150 years but it failed on the night of the Edmund Fitzgerald disaster. The Fitzgerald, which was already crippled by a damaged radar system, was left to fend for itself in the storm of the century.

The ship’s bell was recovered by divers. Today there is a cenotaph near the shore and each year on the anniversary of the wreck the bell is rung 30 times – 29 times for each man on the Edmund Fitzgerald – and one more time for all the other mariners who died in the storms of Lake Superior.

Cemeteries to Visit in Michigan

Richard G. Drew, the inventor of both Scotch tape and masking tape, is buried in Lakewood Cemetery in Minneapolis. When Drew joined 3M in 1921, the company’s main product was sandpaper. Drew took some of their new sandpaper to be tested at an autobody shop.

While there, he became fascinated with the difficult task of maintaining a crisp border when painting the two-toned cars that were popular at the time.

In response, Drew developed some tape that the painters could use that had adhesive on the edges but not in the middle. During the initial test, the tape fell off and the agitated painter snapped at Drew, “Take this tape back to those Scotch bosses of yours and tell them to put more adhesive on it!” (He was using the word “Scotch” to mean “cheap”. — No offense intended on our part! — ) The nickname stuck and so today we have “Scotch tape”!

Cemeteries to Visit in Minnesota

Cemeteries to Visit in Missouri

Cemeteries to Visit in New Hampshire

Cemeteries to Visit in New Jersey

Cemeteries to Visit in New York

Cemeteries to Visit in North Carolina

The Wright brothers – Orville and Wilbur – are credited with inventing, building, and flying the world’s first successful motor-operated airplane. The pair are buried in a family plot with their parents and five siblings in Woodland Cemetery in Dayton, Ohio.

NASA named the first take-off and landing area used by a small robotic helicopter in a 2020 Mars space mission “The Wright Brother’s Field”. And a small piece of fabric from the Wright brother’s 1903 flyer was attached to the underside of the helicopter as a tribute to Orville and Wilbur.

Cemeteries to Visit in Ohio

Cemeteries to Visit in Pennsylvania

Cemeteries to Visit in Rhode Island

Cemeteries to Visit in Tennessee

Cemeteries to Visit in Vermont

Cemeteries to Visit in West Virginia

Cemeteries to Visit in Wisconsin

Photographing gravestones in some of America’s most amazing cemeteries with the BillionGraves app is an awesome experience. Touring in early autumn will ensure that the leaves are still on the trees instead of covering the gravestones!

So take a road trip with the best of both worlds – gorgeous fall colors and genealogical records for families around the globe! Fall foliage cemetery photo trips may become one of your annual autumn traditions!