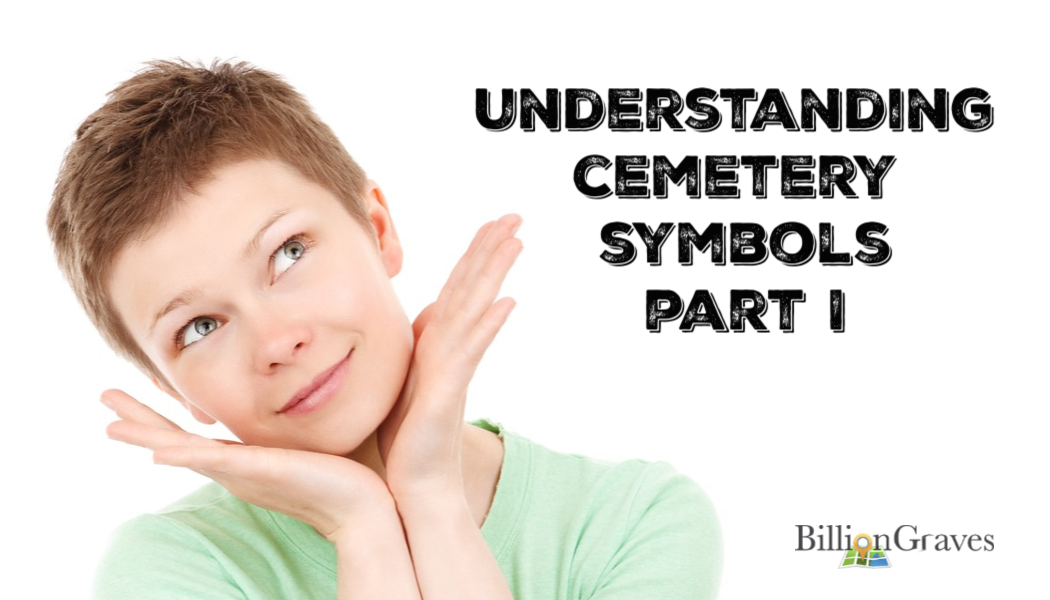 Learning to Read a Cemetery:

Do you remember when you learned to read? As a child, it was fun to look at pictures in books as someone older read the words. But, oh, that magical moment when you realized you could read the words yourself! It opened a whole new world!

Would you like to learn to “read” a cemetery? It’s a genealogical adventure!

On many older gravestones, there are pictures and symbols that tell stories about your loved ones and ancestors. If you can’t read “gravestone-language” you are missing part of the story.

The first time I walked through a cemetery after learning about cemetery symbols was incredible. It was like someone was walking along beside me, introducing me to each person. “Samuel Hanover died at sea.” “Mary Smith passed away suddenly as an infant.” “John and Hannah hope to be together eternally.” In the End, Symbols are Still Just Symbols

The Webster Dictionary definition of symbols is “something that stands for or suggests something else by reason of relationship, association, convention, or accidental resemblance.” The key word in that definition is “suggests.” In the end, a symbol is still a symbol. It represents whatever the person who designed it meant it to be, even though someone else may interpret it differently.

Since we cannot speak to the people who commissioned the symbol on the stone or those who carved it, interpretations should always be considered possibilities, not certainties. That said, there are particular symbols that have come to have commonly accepted meanings through their repeated use. Sometimes an anchor was carved on the gravestones of seamen since it was their last resort in a storm. But more often, the anchor on a gravestone was a symbol of hope. The Bible references an anchor in connection with hope in Hebrews 6: 18-19, “. . . lay hold upon the hope set before us: which hope we have as an anchor of the soul, both sure and steadfast . . .” Those without hope may be like a ship tossed on the sea, their emotions being carried in every direction. The anchor would remind family members visiting the grave to hold on to the hope of seeing their loved one again.

To members of Freemasonry, the anchor represented well-grounded hope, a life well-spent, and eternal tranquility. Angels are some of the most common symbols found in cemeteries. They are carved on gravestones and perch on top as statues. Angels signify that the departed has taken flight into heaven. Some angels are weeping with wings that droop in sadness, denoting sorrow and lamentation. Others are in flight with a trumpet to proclaim the gospel to all the world. Some are walking upright, ready to escort the deceased into heaven.

Sometimes specific angels can be seen in cemeteries, such as St. George from an 11th-century legend, who rescued a princess from a dragon that required human sacrifices. Another is St. Michael with his drawn sword, engaged in the war in heaven against Lucifer.

In older Jewish cemeteries angels were forbidden, as were depictions of human faces. This was in conformity with one of the 10 Commandments, in an effort to thwart anyone from worshipping graven images. In later years, angels were allowed on gravestones if their faces were covered by their hands or arms. The Biblical prophet Ezekiel, escorted by a heavenly messenger, was shown a vision of a city that contained a temple with magnificent architecture. The temple included many arches. In fact, there are 15 references to the arches in this temple in the book of Ezekiel, chapter 40. Arches on a headstone can signify a triumph over death and entry into heaven. A book on a gravestone can symbolize the good deeds of the departed, as recorded in the book of life. It can also represent the scriptures, as a sign of faith.

Books may also indicate that a scholar or teacher is buried at the gravesite. A open book can signify an early death for someone whose lifestory was not yet fully written. At first, it may appear that a gravestone that is missing the upper half has deteriorated, which is entirely possible since every year more and more gravestones are lost to decay. But many broken obelisks were formed that way from the time they were made to signify the cutting short of someone’s life, particularly the head of a family. Butterflies are the symbol of resurrection. Just as caterpillars change into winged creatures that launch into flight, the deceased will rise from the grave, changing into a new being. The Celtic cross can be a religious or a secular symbol. Its arms are of equal length and it is surrounded by a circle. Sometimes it is referred to as a “sun cross” because of the outer circle. The interlacing bands on Celtic crosses are known as Hiberno-Saxon art which originated in medieval times.

Irish legends indicate that St. Patrick designed the cross as a way to link Pagan symbolism with Christian symbols. Pagans at the time were worshipping the sun, represented by the circle on the Celtic cross. St. Patrick overlayed the circle with a cross, a symbol of Christ’s sacrifice. Others claim that the circle represented a moon goddess and the cross signified the greater power of Christianity over the pagan goddess.

Nevertheless, if you see a Celtic Cross on your ancestor’s gravestone it may indicate an Irish or British Isles heritage. Cherubs became popular in the mid-1700’s in New England’s burying grounds. They usually depicted a human-like face with a serious expression, surrounded by wings. Cherubs signify a soul that has gone to heaven.

More modern cherubs usually indicate a child has died, particularly when featured with a lamb. The cross or crucifix is a significant symbol to Christians. In early times the Latin cross was referred to as God’s mark. It is a symbol or eternal life and resurrection. The three ends may represent the Father, Son, and Holy Ghost of the Trinity or faith, hope, and charity. The crown typically symbolizes Christ, also known as the King of Kings. A finger pointing up through a crown indicates the deceased has gone to heaven through the power of Christ’s resurrection.

A crown with a cross in the center is symbolic of the departed soul gaining victory over death through Christ the King. The dove in flight is a cemetery symbol of the Holy Spirit. This comes from the New Testament references to Jesus Christ’s baptism by John the Baptist, “And straightway coming up out of the water, he saw the heavens opened, and the Spirit like a dove descending upon him.” (Mark 1:10)

If the dove has an olive branch in its mouth it is a symbol of peace. This symbol comes from the story of Noah in the Old Testament who sent a dove out from the ark following the flood. The dove returned with an olive branch in its beak, from which Noah could know that the flood waters were receding. Genesis 8:8- “He sent forth a dove from him, to see if the waters were abated from off the face of the ground.” Drapery of any type symbolizes grief and mourning. When the drapery is a flag it may signify that the deceased was in the military or died in battle. A finger pointing downward on a gravestone indicates that God is reaching down for the soul of the deceased. Fingers pointing upward are a very common cemetery symbol. They indicate that the departed has gone to heaven and beckons grieving loved ones to look up. The fleur-de-lis or Lily of France, is a design that appears on many family crests, coats of arms, and in King Arthur’s legends. It is a stylized version of a wild lily and was popularized by the French royalty. To the kings of France, the symbol meant perfection, life, and light and it became the royal emblem.

Joan of Arc bore a banner depicting God blessing the fleur-de-lis as she led French troops in a victorious battle against the English in support of Dauphin Charles VII.

In recent times, the fleur-de-lis has been used as an emblem of the Boy Scouts. The photo above has the words “Be Prepared” on a banner beneath the fleur-de-lis, which is the Boy Scout motto. When the founder of Scouting, Baden-Powell, was asked, “Be prepared for what?” he replied, “Why, for any old thing.”

If your ancestor’s grave has a fleur-de-lis on it there is a good chance that either they were of French lineage or they were a member of the Boy Scouts. Flowers can symbolize that the deceased was in the full bloom of life. Flowers on a cross can indicate growth in Christ or immortality. Grapes on a gravestone symbolize the blood of Christ, God’s care, or Jesus’ Last Supper. The origin of the handshake dates back to the 4th or 5th century in Greece. It signified a token of peace, as the hand was extended without weapons. The shaking up and down may even have been a means of verifying that there was not a dagger or knife up the other person’s sleeve.

In ancient Rome, handshakes were a symbol of loyalty and friendship. Clasped hands were even stamped on Roman coins.

Handshakes also denote that a person’s word is their bond, a giving of a sacred trust.

In the case of gravestone symbolism, handshakes can mean a final farewell or eternal bond between the living and the dead. Clasped hands were sometimes meant to portray the link between a married couple. Other times a handshake indicated God reaching out for the deceased to bring them into his presence. Many gravestones show the deceased’s membership in service organizations. In this case, the departed person was a member of the Kiwanis Club. The organization was founded in August of 1914 in Detroit, Michigan.

The Kiwanis Club has accepted female members since 1987. So if the stone is older and has a Kiwanis emblem you may be assured that the deceased was male. Though the Kiwanis Club has undergone many changes over the years, including their mission, their current motto is “Serving the Children of the World.”

If your ancestor was a member of the Kiwanis Club or other service organization you could try contacting them to obtain further information that may help expand your family tree.

We hope you enjoy the skill of being able to “read” a cemetery!