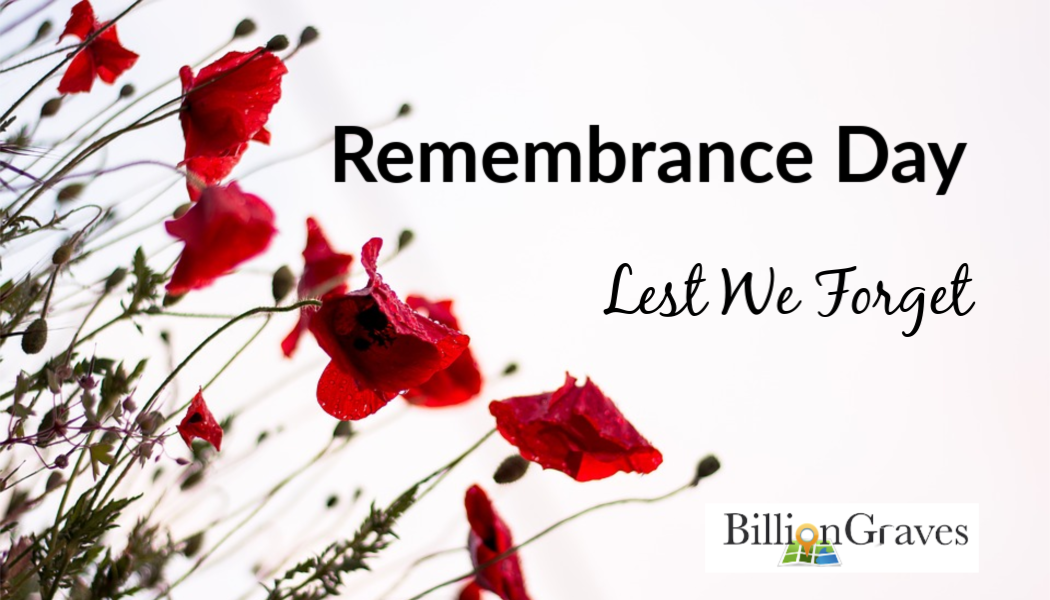 On November 11th, 1918 the guns fell silent across Europe as the Treaty of Versailles was signed to signify the end of World War I. And now this year – November 11, 2019 – commemorates the 101st anniversary of this event, a day that has come to be known across the world as Remembrance Day.

The first Remembrance Day celebration was observed in 1919 at Buckingham Palace in connection with a banquet hosted by King George V in honor of the president of the French Republic. At that time it was known as Armistice Day to mark the signing of the armistice (an agreement made by opposing sides in a war to stop fighting for a certain period of time).

The truce was signed on the 11th day of the 11th month at the 11th hour. Today, in celebration of the peace that came at the end of the conflict, bells are rung 11 times from towers in cities around the globe.

Remembrance Day is sometimes informally referred to as Poppy Day. Why poppies?

Well, from 1914 to 1918, about 8.5 million soldiers fell dead during World War I as a result of battlefield hostilities or disease. The Great War, as it was called at that time, also wreaked havoc on the landscape of Western Europe, where the most intense fighting occurred.

Brutal clashes between the Allied and Central Powers tore up the fields and forests as soldiers marched, camped, fought, and died. But in the early spring, the barren trampled fields gave way to new growth. Tender poppies poked their heads up through the battle-scarred brown soil.

In northern France and Flanders (northern Belgium), it seemed miraculous that such a delicate paper-thin blossom could emerge from the hard-packed dirt. The flower was Papaver rhoeas, more commonly known as the Flanders poppy, corn poppy, red poppy, or corn rose.

Emotionally moved by the sight of a field of poppies in a former battlefield, Candian physician Lieutenant-Colonel John McCrae was inspired to write a poem after presiding at the funeral of his fallen friend and comrade Lieutenant Alexis Helmer.

Helmer had died in the Second Battle of Ypres where McCrae had treated the wounded. McCrae had a firsthand view of this particularly fierce battle in which the Germans used lethal chlorine gas for the first time during a war. About 87,000 Allied soldiers died, were wounded, or were missing in action during the fighting.

Dissatisfied with his initial work, McCrae discarded the poem, but fellow soldiers retrieved it. Titled In Flander Field, it was published in a London magazine in December of 1915. McCrae masterfully channeled the voices of the fallen soldiers buried beneath the poppies into his work.

In Flanders fields the poppies blow
Between the crosses, row on row,
That mark our place; and in the sky
The larks, still bravely singing, fly
Scarce heard amid the guns below.

We are the Dead. Short days ago
We lived, felt dawn, saw sunset glow,
Loved and were loved, and now we lie
In Flanders fields.

Take up our quarrel with the foe:
To you from failing hands we throw
The torch; be yours to hold it high.
If ye break faith with us who die
We shall not sleep, though poppies grow
In Flanders fields.

Across the Atlantic, Moina Belle Michael, an American professor and humanitarian, read In Flanders Field in a women’s magazine just two days before the Armistice was signed. In remembrance of the sacrifices given at Flanders Field, she promised to always wear a red poppy.

To keep this promise, Miss Michael purchased some artificial poppies at a department store. Then she distributed them to her friends and colleagues.

At the end of the war, Miss Michael decided to make and sell red silk poppies to raise money to help support returning Veterans. Soon afterward, the National American Legion voted to use the poppy as the official U.S. national symbol of remembrance.

Remembrance Day Expands Around the World

Meanwhile, in France, another woman was promoting silk poppies in a similar enterprise. Anna Guérin was a formidable fundraiser during and after World War I – for the war effort, for France, and for the Red Cross.
She was a dynamic speaker who could lecture to a crowd recently canvassed by others and come away with great sums of money.

Madame Guérin was the director of the “American and French Children’s League” and she adopted the poppy as the charity’s emblem. The charity provided war veterans, women, and children with fabric to make artificial poppies. The flowers were sold to help fund the rebuilding of war-torn regions of France and to assist orphaned children.

In the early 1920s, Madame Guérin traveled herself or sent representatives to Australia, Britain, New Zealand, and Canada to spread the idea of the memorial poppy to the nations the had been allied with France during the war.

When Madame Guérin’s campaign came to England in 1921 the Royal British Legion held its first-ever Poppy Appeal, selling millions of the silk blooms and raising more than 106,000 pounds to assist Veterans in finding employment and housing.

Remembrance Day from Nation to Nation

Today, almost a century after World War I ended, millions of people in the United Kingdom, France, Canada, Belgium, New Zealand, and Australia commemorate Remembrance Day by wearing poppy boutonnieres and visiting the graves of loved ones at the cemetery.

Here are some of the ways Remembrance Day is observed around the world:

Great Britain and the Commonwealth Nations

In many British Commonwealth nations, it is the tradition at 11 am on the 11th day of the 11th month, to sound the bugle call The Last Post.

That is immediately followed by a 2-minute silence, a period for reflection and prayer. Next, wreaths are laid to honor the fallen – a traditional means of signifying high honors in ancient Greece and Rome. Finally, blessings are offered and national anthems are played.

A night vigil is sometimes held at the gravesides. This follows a war-time tradition in which soldiers watched over their slain comrades. This was done to be sure that the fallen were truly dead and not just unconscious or in a coma. They also guarded against the body against being stolen or desecrated by the enemy or scavengers.

In Australia, Remembrance Day is not a public holiday, but it is observed by most in some fashion. Like the British nations, The Last Post is played and a 2-minute silence is observed at 11 am. Pedestrians pause in reverence as buglers from the Australian Defence Force sound the tribute on street corners.

School children recite the Pledge of Remembrance and teachers encourage them to emulate the resilience of those who fought for their country when they face difficult situations.

In recent decades, Remembrance Day has taken a backseat to Anzac Day, a public holiday held on April 25th to commemorate Veterans.

Parades and Remembrance Day ceremonies are held on the National Heroe’s Square. Observances attended by the Prime Minister and Governor-General include an interdenominational religious service, graveside wreaths, and a gun salute.

In Canada, some holidays are selected by the territories and provinces rather than by the entire nation. And most of Canada has opted to observe Remembrance Day as a statutory holiday in “remembrance for the men and women who have served, and continue to serve our country during times of war, conflict, and peace.”

There is a national ceremony in Ottawa which is presided over by the Governor-General of Canada. Occasionally a member of the Royal Family may attend.

The national anthem, O Canada is played and then poppies are laid on the Tomb of the Unknown Soldier. Just before 11:00 am the Last Post is bugled follow by a gun salute and bells peal from the Peace Tower. Next, there is 2 minutes of silence, a 21-gun salute, and a flyover by the Candian Air Force.

A choir then sings In Flanders Fields and wreaths are laid on memorial stones. One of the wreaths is laid in honor of all the mothers who have lost sons in conflicts in which Canada participated.

November 11th was formerly known as Armistice Day in the United States. Now known as Veterans Day, it is a national holiday to honor all Veterans – both the deceased and living. It is observed with parades, salutes at military cemeteries, and memorial flag ceremonies.

In the United States, Memorial Day – which is observed on the last Monday in May – is more akin to Remembrance Day. It is a time when families visit cemeteries to pay tribute to fallen Veterans and honor their ancestors in general.

P.S. There are many ways to honor those who have gone before us. One great way is to preserve their memory by photographing their gravestone with the BillionGraves app on your smartphone. This automatically tags the location with GPS coordinates on a map, making it easy for family members and genealogists to find their gravestones.

If you would like to lead a group project to take photos of gravestones for an entire cemetery with the BillionGraves app, please send us an email at Volunteer@BillionGraves.com and we’ll help you get started right away!