Top the Leaderboard: Track Your Stats

BillionGraves, 12 years ago 3 min read 4278
The Android app isn’t the only thing we’ve been building over the past few weeks: we’re also improving the way we track photos, records, and cemeteries. A lot of what we’ve done keeps the database running smoother and you’ll never have to see it. But one fun part about our tracking everything is we can now acknowledge those of you who have participated above and beyond expectations. Yesterday we launched the BillionGraves Leaderboard (you’ll need to be logged in to see it; there’s also a link to it from your dashboard). 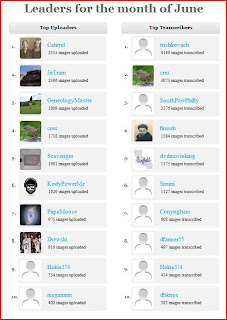 Click on the photo to enlarge the board for June’s leading transcribers and photo collectors (as of 10:10 AM MDT). A special congratulations to Catirrel and trishkovach, who each are currently topping either the photo or the transcription list. And an extra thank you to crex and Hokie374, who both are into the Top 10 for both categories.
The Leaderboard results can be viewed according to the current month or all time, and they update constantly. It’s not much, but it’s our small way of recognizing everyone who is working so hard to contribute to the BillionGraves project.
In addition to the Leaderboard, we’ve made several subtler improvements to existing aspects of the site.
Report Images
For transcribers, there’s now a much improved Report Image function. If you click the red button beneath a problem photo, you’re given several options as to the reason why you’re reporting the photo (this helps us know what to do with it):
Before you mark a photo or stone as unreadable, please make sure it actually is. There are many photos and stones that may be less than ideal, but are still legible with a bit of zooming, squinting, and informed thinking.
Shortcut Keys
In case you aren’t already aware, I want to let you know about our shortcut keys for transcriptions. CTRL+S will save your transcription and CTRL+I will add an individual. We plan to add even more of these so transcriptions can be as quick and easy as possible.
Add an Individual to a Saved Transcription
There have been a few instances in which a transcription was saved before all the individuals in the photo were recorded. Unfortunately there was no way to add an individual after saving. That has been remedied, so you can now add individuals regardless of where you are in the transcription process.
Basic Error Checking
We’ve introduced some basic error checking (someone’s birth or death date cannot be recorded as tomorrow, for example). We intend to make these more sophisticated as we go along so we can improve the quality and accuracy of BillionGraves transcriptions.

Thank you to everyone who has already downloaded the Android app this weekend and started using it. You’ve given the swift-fingered transcribers a lot more to do.