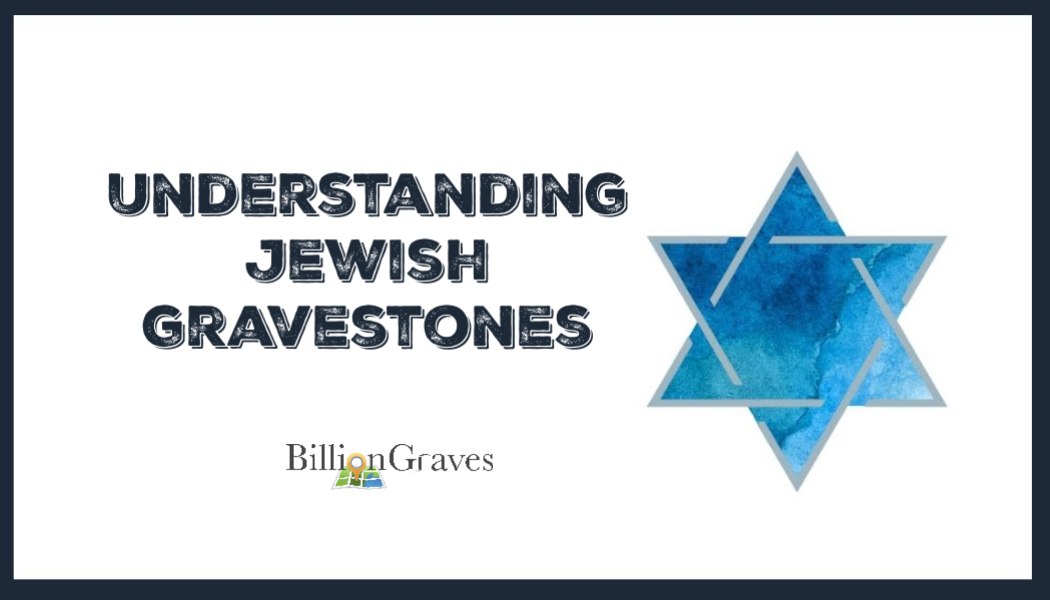 If you’ve spent much time in cemeteries, you’ve probably seen some matzevot or Jewish gravestones. You may have wondered – what is the significance of the rocks placed on them? Why are some of the gravestones vertical and some horizontal? Or what do the inscriptions and symbols on the Jewish gravestones mean?

My own aunt, who was raised Christian, married a Jewish man. Eventually, she converted to Judaism herself. So I grew up experiencing Jewish traditions when we visited their home.

We ate Passover meals with the door left ajar and an extra plate set at the table in case the prophet Elijah returned. We lit candles in menorahs on Friday evenings for Shabbat (Sabbath) services. Prayers were offered in Hebrew over my aunt’s homemade Jewish braided egg bread called Challah.

Jewish culture tends to be infused throughout daily life in Jewish homes and that culture is even carried over into the cemetery. Understanding Jewish gravestones helps us understand Jewish hearts. And this fosters love and understanding.

Why are there rocks on Jewish gravestones?

Why are there rocks on Jewish gravestones? Well, there are various reasons, so that depends on who you ask.

Some believe that the soul of the deceased remains near the body for a time after death and the rocks will help to keep them from leaving too soon.

Others say the rocks were originally to mark the site of a corpse as a warning to passing Jewish priests against getting within 4 feet of a dead body, which would render them unholy.

Still others have an even older idea. Anciently, before gravestones were used to mark final resting places, people covered burial sites with a pile of rocks called a cairn. Over time, the weather could erode the cairn or animals could disturb it, so it became a tradition for visitors to take a rock with them to place on the cairn to replenish the monument.

Today, most visitors to Jewish gravestones place a stone to show that that they have been there and that the individual’s memory continues to live on in and through them. It is an acknowledgment that the deceased has not been forgotten.

Are Jewish gravestones vertical or horizontal?

Jewish gravestones may be vertical or horizontal, depending on the subgroup to which the deceased belonged. The two main Jewish cultural subgroups are Sephardic and Ashkenazic.

While the most traditional tombstone style for Ashkenazic Jews is a vertical slab with a rounded or pointed top.

Sephardic stones sometimes have angelic or human figures and biblical images on them.

But images are not permitted on Ashkenazic stones at all in order to prevent the sin of idol worship.

Today both groups make frequent use of classic Jewish symbols such as the Star of David, menorahs, candlesticks, and lions.

The earlier Jewish gravestones were of wood, while today they are made from stone or granite. Tombstones are expected to be similar to those around it, to avoid embarrassing those who cannot afford an ornate monument. But exceptions may be made for a great Torah scholar or sage.

Families are discouraged from praising the deceased’s qualities in epitaphs since some believe that the soul will have to account for what is written on their gravestone during judgment.

What do those Hebrew inscriptions mean?

The heading on most Jewish tombstones is an inscription of the abbreviation ‘פנּ, which stands for po nikbar or po nitman, meaning “here lies.”

At the bottom of most Jewish gravestones is the abbreviation ת נ צ ב ה, a quote from I Samuel 25:29 meaning, “May his soul be bound up in the bond of eternal life.”

Jewish tombstones with Hebrew inscriptions have a bonus for genealogists since, in addition to listing the birth and death dates, they also list the name of the deceased’s father. This allows families to go back one more generation in their family tree.

So usually, just below the deceased’s Hebrew name is the Hebrew phrase בן, ben, “son of” or בת, bat, “daughter of,” followed by the person’s father’s given name and sometimes the mother’s name as well.

The Jewish calendar starts its first year with the creation of the world. It is believed that this calendar was designed in the 4th century by Patriarch Hillel II who determined the age of the world by adding up the ages of Biblical figures and other Biblical events. The calendar he created begins 3760 years before the Christian calendar.

The Star of David was the most recognized symbol of Judaism. It is seen on many Jewish gravestones as well as on the national flag of Israel.

The Star of David is known in Hebrew as Magen David or the shield of David.

Hands that are held in this position are a symbol for those who have inherited a priestly heritage.

The majority of those who have this priestly heritage have had the last name of Cohen – a name which literally means “priest” in Hebrew. They are those who have descended from Aaron, the brother of the ancient prophet Moses.

Aaron’s priesthood rights have been passed down from generation to generation. Those who inherit this right or power use it to perform priestly duties.

One of the things they do is to hold their hands as pictured on these gravestones when offering an Aaronic benediction or blessing over the Jewish people.

The menorah, a symmetrically branched candlestick, represents the nation of Israel and its mission to be a “light unto the nations.”

God gave Moses specific instructions on how to create the menorah that was to be a light to the Israelites in the portable sanctuary they first used in the wilderness and later in the Temple in Jerusalem.

The instructions are recorded in Exodus 25:31-40 for a candlestick to hold seven candles (one main stem and six branches) to be made of pure gold.

On gravestones, menorahs symbolize the deceased’s deep commitment to Judaism throughout their entire life.

Bookshelves indicate that the person who has passed on was a scholar or a rabbi.

This bookshelf is being supported by lions, a common symbol for the tribe of Judah.

The broken tree next to this bookshelf symbolizes that the life of this scholar or rabbi was cut short and he died young.

The hat on top of this bookshelf indicates that the deceased was a Levite. He would have dressed like the figure below when serving in the temple.

For more Jewish gravestones with bookcases on them check out this blog post and to learn more about Jewish crown symbolism click here.

Candlesticks on a headstone usually symbolize the final resting place of a woman.

This is due to the fact that when the candles are lit in a Jewish home on Friday evenings at sundown, it is traditionally the woman of the house who waves her hands over the candlesticks three times to welcome in the Shabbat (sabbath).

The candles in the candlesticks on this gravestone are broken, which signifies that the life of this woman was cut short. In other words, she died young.

The draperies above the candlesticks signify mourning.

Gravestones for Levites of Ashkenazi descent often feature the Levite symbol of a pitcher in reference to the Levites’ traditional duty to wash the hands of the temple priest (the Cohen) prior to religious worship.

The engraving on this tombstone is of someone placing alms for the needy in a Tzedakah box.

Here is a list of charitable deeds in order of importance as created by the renowned Jewish sage Maimonides, with the highest act of kindness being number one – helping others to be able to provide for themselves.

Anciently, Jacob was given the name of Israel by God. Jacob or Israel became the father of 12 sons. Judah was the 4th of Jacob’s 12 sons. The Jewish people come from the tribe of Judah.

Each of the 12 tribes was given land to govern and occupy.

These symbols have been used on postage stamps in Israel.

The symbols of the 12 tribes of Israel were also used on Coats of Arms during the Middle Ages by the heraldry in western Europe.

So it only makes sense, that the tribal symbols are also found on gravestones.

In Genesis 49:9 it states that the patriarch Jacob (Israel) referred to his son Judah as a Gur Aryeh גּוּר אַרְיֵה יְהוּדָה or “Young Lion” (Genesis 49:9) when blessing him. Thus lions are the symbol of the tribe of Judah.

The tribe of Judah became the seat of monarchy for the 12 tribes of Israel. Hence, the crown represents Judah’s royal lineage.

The Hebrew inscription being held up by this pair of lions are the letters “pey” and “nun”, which mean “here lies”.

On this gravestone, the two lions are supporting tablets representing the Ten Commandments.

This gravestone combines the symbols of Cohen hands as well as the lions and crown that represent the royal tribe of Judah.

The deer is a symbol of the tribe of Naphtali, one of the twelve tribes of Israel. Nephtali was the sixth of Jacob’s twelve sons (Genesis 30: 7-8).

The Talmud says, “Be as enduring as the tiger, as free as the eagle, as fleet as the deer, as strong as the lion, so as to fulfill the will of your Father in Heaven.”

Sometimes gravestone symbols represent the interests of the deceased, such as the ocean and ship below.

Visitors to this Jewish gravestone have placed both rocks and seashells in remembrance of the departed.

Eagles are a nod to the scripture from Exodus 19:4, “I carried you on the wings of eagles and I brought you to Me,” while the panpipes and horn indicate the departed’s musical gifts. The crown is a symbol of Judah being a royal tribe.

The treble clef represents the deceased’s interest in music.

This gravestone from Zydowski Cemetery in Warsaw, Poland is symbolic of “turning back the hands of time”, “turning back the clock”, and “turning to the past”. The mask and harp represent the deceased’s accomplishments in theater and music.

The word yahrtzeit literally means “time of one year” in Yiddish. On the first anniversary of the death of a loved one, the parents, spouse, siblings, and children meet at the gravesite or in the home of the deceased for a day of fasting and prayer.

On this anniversary, they light a candle called the yahrtzeit, a ritual to keep the deceased family member’s memory alive. The yahrtzeit candle is left to burn for 24 hours.

May your adventures in the cemetery be interesting and may YOU be a light to the world!

P.S. If you would like to take photos at a cemetery with your organization, please send an email to Volunteer@BillionGraves.com with your location and the date planned for your event and we’ll be happy to help you. Or you may contact us for information on how you can take gravestone photos on your own as well. We’d love to hear from you!

P.P.S. Many thanks to Philip Trauring for his resources and wealth of knowledge about Jewish genealogy as found on his website bloodandfrogs.com. We highly recommend it!

This article has been updated to include photo attributions, Feb 6, 2020. If we have unintentionally missed an attribution of any photo used in any of our content please contact us for proper attribution via support@billiongraves.com.