Home > Lifestyle > 5 Awesome Mausoleums from Around the World 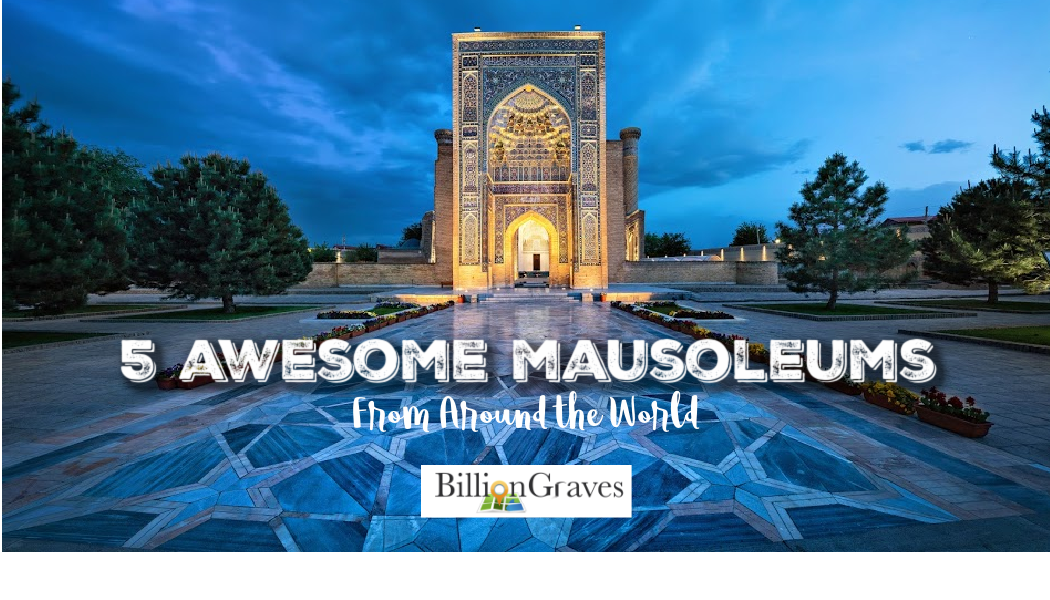 Awesome mausoleums from around the world vary in size and style, but they share the common purpose of showing respect for the departed.

Since the beginning of time, people have developed different ways to bury their deceased loved ones. Mausoleums were some of the earliest and remain one of the most popular methods.

What is a Mausoleum?

A mausoleum is a building constructed at a cemetery to house the remains of a deceased person or an entire family in their own burial chamber.

Mausoleums can be large and imposing, designed to impress the living. Others are small and more intimate with simple elements.

They were often created in the same architectural styles that were popular in the time period in which they were constructed. They may have symmetrical classic columns, curved Baroque lines, or ribbed vaults.

But mausoleums do tend to have some common elements on the interior. They usually have an open space in the center with tombs, crypts, or burial compartments in the walls. Caskets are usually placed in each individual space and are then sealed off with granite or marble.

Each person’s name is typically carved into the stone that seals the burial compartment or engraved on a metal plaque. When the mausoleum houses the remains of an entire family, the last name of the family is usually carved above the entrance to the building.

As we look at some awesome mausoleums from around the world, one has to wonder, why do some people choose to be buried in mausoleums?

Mausoleums can save space over traditional in-ground burials as it allows the plot of ground to become the final resting place for more than one person. Caskets can be placed within the walls, one on top of another.

Snow and rain can erode traditional burial plots, making the ground sink or become uneven. But mausoleums, with their cement foundations, will not be easily moved.

In some areas of the world, like New Orleans, Louisiana in the United States, residents learned the hard way that in-ground burials would not work. Bodies or coffins rose to the surface when the area flooded during storms. So mausoleums took the place of in-ground burials where the ground was too low and water-sodden for traditional gravesites.

When family members come to the cemetery to mourn and to reflect on the life of their loved ones, it can mean a lot to them to have a private setting.

The four walls of a mausoleum can provide the peace and quiet they are seeking. It is not uncommon to see a chair or couch placed inside the mausoleum for visiting family members.

The word “mausoleum” comes from the name King Mausolus, a king who lived from 377 to 353 BC. He ruled over Caria in Asia Minor near the Mediterranean Sea in what is now modern-day Turkey.

King Mausolus reigned with his wife Artemisia (who was also his sister) and they chose the city of Halicarnassus to become their new capital. The couple spent tremendous amounts of tax money to embellish the city with elaborate buildings.

So it follows logic, that when King Mausolus died, his grieving wife had an elaborate structure built to house his remains. In fact, Mausolus had planned it himself before he died.

It rested on a massive stone platform and was surrounded by columns. The mausoleum was 45 m (148 ft) in height, towering over the rest of the city.

Four Greek sculptors were employed to carve each of the four sides of the building with reliefs of humans and animals.

After Queen Artemisia passed away just two years later, Mausolus’ siblings continued to expand and adorn the mausoleum. Eventually, it was designated as one of the Seven Wonders of the Ancient World.

Although King Mausoleus’ gravesite was believed to have been destroyed in a series of earthquakes, his name lives on with each mausoleum that has been built around the world.

In 134 AD, the Roman Emperor Hadrian commissioned a large cylindrical mausoleum for his own family. The stone structure originally had a garden on the rooftop and bronze statues around the perimeter. Not only was it beautiful, but it was the tallest building in Rome.

After Hadrian’s death, other Roman emperors made this their final resting place as well.

When Visigoth looters sacked Rome in 410 AD, the mausoleum was vandalized. They toppled the statues and scattered urns filled with ashes.

Additional damage to Hadrian’s mausoleum occurred during the Renaissance when the stone columns were removed and taken to the Vatican City to decorate Saint Peter’s Basilica.

Eventually, the name of this mausoleum was changed to Castel Sant’Angelo in Italian or Castle of the Holy Angel in English. The statue on the rooftop represents St. Michael, who some say appear there to sheath his sword at the end of the plague of 590 AD.

In the 14th century, the mausoleum was converted into a castle by the Catholic papacy. Elaborate apartments were added as a place of refuge for the pope during potential attacks. A prison was also constructed within the mausoleum and executions were performed in the small inner courtyard.

Today, Castel Sant’Angelo is open to the public as a museum.

One of the most famous mausoleums in the world is the beautiful Taj Mahal in Agra, India. It was built by Emperor Shah Jahan between 1632 and 1648 as a burial site for his favorite wife, Mumtaz Mahal. He is also buried there.

The complex covers 42 acres (17 hectares) and, in addition to the mausoleum, it includes a mosque, a guest hours, and formal gardens.

The word Taj Mahal translates to Crown of the Palace in English. A palace indeed! There were about 20,000 artisans employed in the construction of this awesome mausoleum. It cost about 32 million rupees in it day, which would be about 70 billion rupees in 2020 (about $916 million in US dollars).

Ancient Egypt’s pyramids are the most recognizable mausoleums in the world. They represent the man’s flight from the natural world toward the sun or afterlife.

The pyramids of Egypt have fascinated travelers and conquerors since ancient times. These awesome mausoleums continue to inspire tourists, mathematicians, and archeologists who visit to photograph, explore, measure, and analyze them.

The Pyramid of Khufu at Giza is the largest Egyptian pyramid. Its base covers 13 acres and though it has sunk a bit, it was originally 481 feet high. It is the only one of the Seven Wonders of the Ancient World still in existence.

I also visited these infamous mausoleum pyramids in Egypt. Even while sitting on the back of a tall camel, I felt as tiny as a speck of the desert sand next to these mammoth structures.

Today, many modern mausoleums are patterned after the ancient pyramids. They are adorned with Egyptian symbols but many also have added Christian symbols. Hence, it is not uncommon to see an angel guarding the door of a pyramid-shaped mausoleum in a cemetery.

Frank W. Woolworth (1852-1919), the entrepreneur who founded five-and-dime stores, is entombed in this Egyptian-style mausoleum in the Bronx, New York. It features scarabs, sphinx, ankhs, sun discs, cobras, lotus, and other Egyptian symbols.

The Père Lachaise cemetery in Paris, France is the most visited cemetery in the world, with over 3.5 million visitors annually. Part of the attraction to this cemetery has to do with the large number of awesome mausoleums.

Mausoleums line the roads and walking paths at Père Lachaise. They are layered up and down the hillsides.

I confess, I stepped inside of one of these mausoleums at Père Lachaise to keep from getting drenched when a light Parisian rain suddenly turned into a downpour.

There were chairs with red velvet seats and carved wooden backs. Shelves that lined the walls were filled with candles, flowers, photographs, crosses, and angel figurines. Scriptures were left on a table for visitors looking for comfort.

I began to see how these awesome mausoleums could be private, peaceful places for mourners to spend time thinking about their loved ones.

How to Take Photos of a Mausoleum with the BillionGraves App

As volunteers take photos with the BillionGraves app, each gravestone is automatically marked with a GPS location. The data is then transcribed by volunteers, plotted on cemetery maps, made readily available at BillionGraves.com for free for millions of families around the globe for generations to come.

The GPS-marked cemetery maps not only allow families to find their ancestor’s gravestones, but they also allow future volunteers to see exactly what has already been photographed.

Taking Photos of Gravestones and Private Mausoleums with the BillionGraves App

Download the BillionGraves app to your smartphone from your app store. Create an account on the app or at BillionGraves.com. It’s free.

Open the BillionGraves app as soon as you arrive at the cemetery since the GPS feature will work best if the app has about 5 minutes to connect before you begin taking photos, especially if you are taking photos in a remote area.

From the main screen of the app, tap on the green button labeled “take pictures” to begin taking photos at the cemetery. The GPS coordinates will be recorded automatically.

If you are taking photos of gravestones, go up and down the rows, taking pictures of each one until you have completed an entire section or the entire cemetery. Keep moving at a quick pace. If you take 1 photo every 15 seconds you will have taken almost 250 photos in an hour! If you are working with another person, leap-frog over each other’s rows until you have completed a section.

When you come to a mausoleum, you will be taking several photos and linking them together. First, step way back until you can see the entire building and take your first photo. This can be an important one since the family’s last name is often inscribed above the door.

Next, tap on the chain icon in the corner of your phone screen. This will link the first photo with the next photo that you take.

Then walk around the outside of the mausoleum and take photos of any other names, dates, or epitaphs on the outer walls. Tap on the chain icon in between taking each photo.

If the door of the mausoleum is unlocked, step inside and take a photo of each person’s data. Remember to tap on the chain icon between each photo so they will be linked together.

When you are finished for the day, it is time to upload your photos. You can do this right at the cemetery if you have unlimited data or you can wait until you connect to Wi-Fi.

Return to the main screen of the app, tap on “photos”. When the orange button that says “upload” appears, tap on it to submit your gravestone and mausoleum photos.

If you encounter a public mausoleum building, go inside.

Stand way back and take a photo of the entire wall at once (or a section of it if it is too large). Tap on the chain to link to the next photo. Then take a photo of one individual’s names and dates.

If you have any trouble with GPS connectivity, go to the main screen of the app, and select “settings”. Then go to “use indoors” and toggle to turn it on. Remember to shut it off after you are done working indoors.

You are welcome to do this at your own convenience, no permission from us is needed. If you still have questions or concerns after you have clicked on the link to get started, you can email us at Volunteer@BillionGraves.com. We’ll be happy to help you!