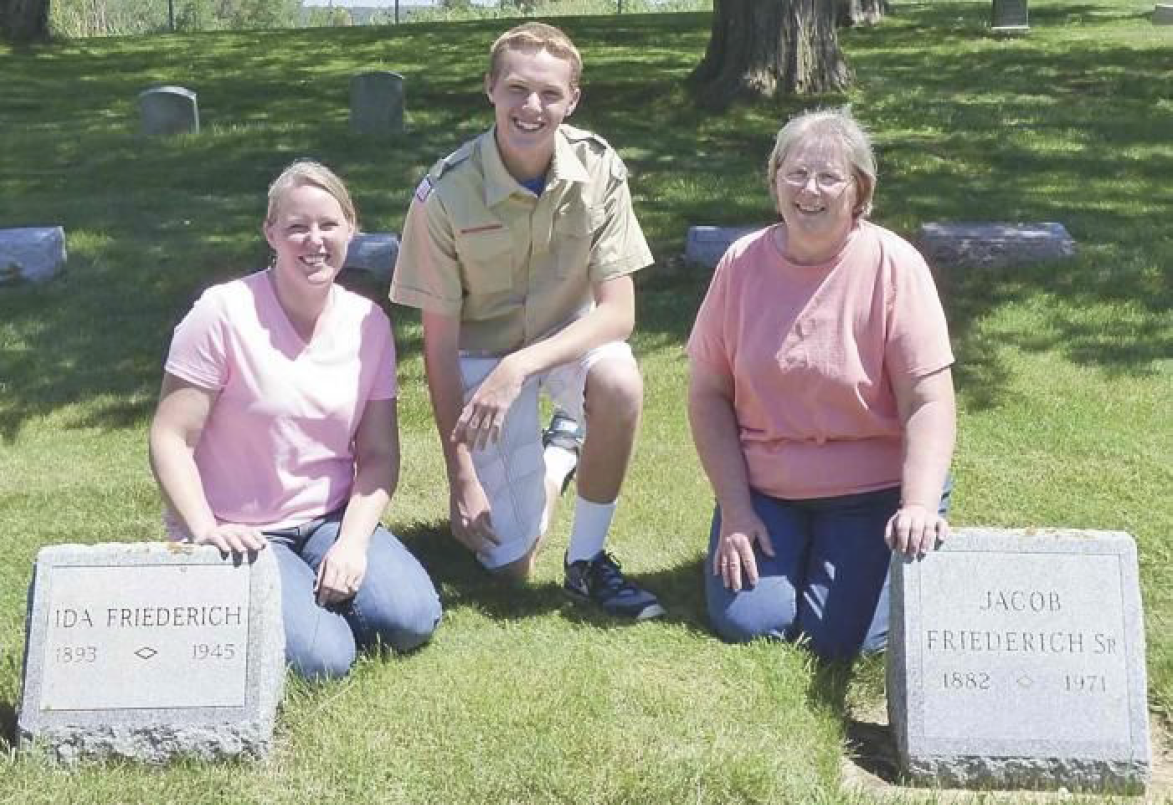 In today’s world, technology is growing at a rapid pace. It is now routinely found in areas that heretofore had not even been imagined by our parents, let alone our grandparents. One such area where you may not have considered how technology could be used is in our cemeteries. Yes, that’s right, I said cemeteries. And, of course, it is the youth who lead the way.

“A couple of months ago I was looking for an Eagle Scout project with some of my friends, and my mom showed me a website called billiongraves.com that basically is trying to record images of gravestones and log their GPS locations. Since I am into using technology, that appealed to me right away,” said Cade Fuhriman, a 16-year-old high school student from Salt Lake City, Utah.

Cade’s mother is Rachel (Frieden) Fuhriman, daughter of Martin and Deb Frieden, who grew up in rural Elgin and graduated from Valley High School in 1996. When Cade discovered that all the cemeteries in Utah had already been documented, his mother had an idea.

“I knew of a place just down that road from where my parents live, the Apostolic Church Cemetery, that would be perfect for a project like this. We checked it out and no one had done anything with it yet, so here we are,” explained Rachel, who now lives with her husband Shawn in Salt Lake City.

The Apostolic Church Cemetery, located southeast of Elgin on Abbey Road, was mowed and cared for by the Frieden family for a number of years. Cade estimates that there are more than 400 graves to be photographed and transcribed in the cemetery, several of which belong to his relatives. As we walked among the grave markers, he stopped to do a little cleaning and take a photo of his great-great-grandfather’s grave, Jacob Friederich Sr.

“There are many people buried here that are our relatives, including some with the last name of Friederich, Schneider, Butikofer, and Frieden. It’s just amazing that you can do something like this, which could be very helpful to someone searching for a relative who doesn’t live close by,” said Deb Frieden, Cade’s grandmother who lives just down the road from the cemetery.

The goal of billiongraves.com is to preserve at least one billion graves by using modern technology to capture images of headstones with their GPS locations so that users worldwide can access those records from anywhere. The site can be searched by location of a known cemetery or by an individual’s name. It is relatively easy to use and anyone can create an account for free.

As Cade began the project, he expected that preparation and organization would be the most difficult part of the task.

“Doing some cleaning of the stones so that they will be readable when they are photographed will take some time, and I will have some family members helping me with that. I also have a group of 8 to 10 fellow Scouts who will help me transcribe all the information from the stones into billiongraves.com. I have to make sure that we aren’t redoing graves that may have already been done and that we aren’t overlooking any, as well,” said the aspiring Eagle Scout.

Fuhriman is a member of Troop 7630, which is in the Great Salt Lake Council in Utah. He is hoping that after he returns home, he can complete the project within a couple of weeks. As of this writing, 502 images had been entered into billiongraves.com for the Apostolic Cemetery, which is actually located just across the county line in Clayton County.

“When I was researching the Apostolic Cemetery, I noticed that of the 127 cemeteries listed in Clayton County, only four of them had documented photos. There seems to be plenty of opportunity for anyone else who is interested in doing something like this to help document their family or community history,” observed Cade.

Billiongraves.com has partnered with familysearch.org and myheritage.com to assist those who have a desire to discover more about their family history through the use of technology. Anyone who creates an account on billiongraves.com can become involved in the transcription of gravestone photos already uploaded by others like Cade. If you are interested in taking photos of gravestones, the first step is to determine if a cemetery has been documented and to what extent. After downloading the billiongraves.com app on a smart phone, you can visit the cemetery to take photographs and add to the site any information that has not already been recorded.

It might interest some to know that a search of Fayette County on billiongraves.com currently lists 59 cemeteries, of which only 11 have documented photos. On your next trip to any cemetery in Fayette County, you might want to consider taking your smart phone along and playing a role in the preservation of your community’s history.

Fuhriman’s interest in technology and his experience as a family historian consultant for his congregation of The Church of Jesus Christ of Latter-day Saints in Salt Lake City made this project a perfect fit for him. Combining those two things, as well as the connection his own family has to the Apostolic Church Cemetery has been rewarding for him.

“I hope that when this project is completed, it will benefit people here as well as people who may not live in this area but do have an interest because their family has a history here. Hopefully having the information available online will help people make connections that they wouldn’t be able to otherwise,” closed Fuhriman.

While technology may frustrate us from time to time, there is no doubting that it can often be used to turn a daunting task into a more manageable one. By helping to create access to information in cemeteries across the country and throughout the world, you just might be able to help someone find that lost relative for whom they have been searching. Or, like Cade Fuhriman, you might learn a little about your own family as well.

BillionGraves Plus, Tips and Tricks

A BillionGraves Gift for Eagle Scouts