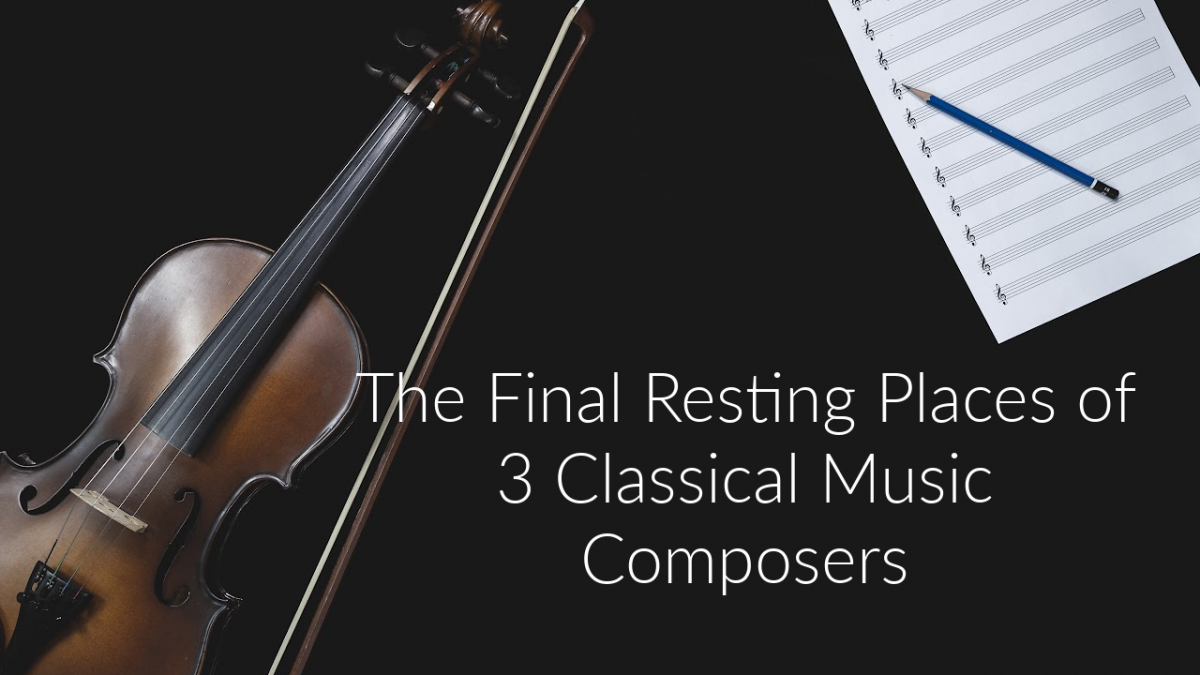 The final resting places of three classical music composers – Beethoven, Bach, and Mozart – remind us of a musician’s ability to “let the last note linger”.

A lingering note is the feeling that is left in the air after a song has ended. Hundreds of years after these 3 famous composers were laid to rest, their music lingers on.

In his younger years, Grandpa Ludwig was a bass singer in the royal court of Clemens August in Bavaria and later rose to become the music director and premier musician in Bonn, Germany.

Grandfather Ludwig had just one son, Johann Beethoven (1740–1792). Johann was forced to sing in the royal choir at Bonn – and he resented every moment of it.

Johann eventually married and had a family. Of the seven children born to Johann van Beethoven, only the second-born, Ludwig, and two younger brothers survived beyond infancy.

Johann was an alcoholic and an abusive father. When young Ludwig showed natural musical talent, Johann hoped to exploit him as a child prodigy. Sometimes Johann would drag Ludwig out of bed during the night and force him to practice piano and violin until dawn, beating him or locking him in the cellar when he made mistakes.

Ludwig’s first public performance was at the age of 8 – although his father advertised his age as 6.

At age 17, Beethoven assumed responsibility for his family, ensuring that his younger brothers, Karl and Johann, were provided for.

Ludwig moved to Vienna to further his training and quickly became a favored performer of the Viennese nobility. He gave recitals in their private parlors but he did not bow or scrape to anyone.

Fueled by the ideals of the French Revolution, Beethoven considered himself the equal of the upper classes and he had no qualms about letting them know it.

Beethoven once said to his royal audience, “What you are, you are by accident of birth; what I am, I am by myself. There are and will be a thousand princes, but there is only one Beethoven.”

Ludwig refused to perform at the noble’s beck and call. He slammed the piano lid in a raging fit if listeners did not give him their full attention.

Nonetheless, aristocrats tolerated his stormy personality because they admired his incredible gift for music.

For each masterful piece that Beethoven composed, there were 6 or 7 offers for purchase. He wrote, “I have more orders than I can execute. No more bargaining! I name my terms and they pay!”

Alas, at the age 27, Beethoven began to lose his hearing. He gradually withdrew from social circles and the ungovernable composer evolved into what the poet Goethe described as a “totally untamed personality”.

Beethoven began to neglect his home and his personal hygiene. He wandered the streets, singing, or stopping to write musical scores in a notebook. Once he was even arrested when he was mistaken for a beggar. By 1818, Beethoven was completely deaf.

Even though he could not hear a note, it was music that was Beethoven’s lifeline. In a despairing letter to his brothers, Beethoven wrote, “It seemed to me impossible to leave the world until I had given all that I felt was within me”.

In 1827, as Beethoven lay dying, gifts from admirers arrived from all over Europe.

His funeral was Vienna’s largest public event since the fall of Napoleon. Theatres, shops, and schools closed their doors as some 20,000 people lined the streets as Beethoven’s coffin passed by on the way to Währinger Cemetery.

Währinger Cemetery was closed in the 1870s and by the 1920s was reopened as a public park. In 1888, Beethoven’s remains were moved to the new Zentralfriedhof (Central Cemetery) in Vienna, although a memorial stone was retained at Währinger Cemetery out of respect for the musical genius.

Zentralfriedhof has a special section for musicians and so it is that Bach’s gravestone is surrounded by monuments to other musical greats such as Johannes Brahms, Franz Schubert, and the Strauss family.

Before his passing, Beethoven wrote to a friend, “Music is a higher revelation than all wisdom and philosophy.” It was alleged that his final words were, “I shall hear in heaven.”

Bach was born into a family of musicians and composers in northern Germany. By the age of 10, he was orphaned and was sent to live with an older brother. His brother was an organist and he gave Johannes his first lessons on the keyboard.

By the age of 18, Bach was appointed to be the royal court organist. When a new organ was built at Arnstadt Neue Kirche (New Church), he was invited to help test it.

During his lifetime, Bach composed more than 1,000 pieces of music.

Bach is best remembered for his sacred compositions for the keyboard but he also sang and played many other instruments.

Toward the end of his life, Bach began to go blind. Following an operation on both of his eyes by a traveling British eye surgeon, Bach was totally blind. He was unable to play the organ, compose, lead choirs, or direct orchestras.

After Bach’s death, an inventory was taken of his estate. It included five harpsichords, a lute, a viola, two lute-harpsichords, a spinet, three violins, two cellos, and 52 “sacred books”.

His gravesite was left unmarked, which was common for his day. And for nearly 150 years, it remained unmarked.

That building was destroyed by bombs during World War II and by 1950 Bach’s remains were moved to their present site at St. Thomas Church.

Bach left a legacy that has lasted through the generations but he did not try to draw attention to himself. In humility, he said, “I play the notes as they are written, but it is God who makes the music.”

And “The aim and final end of all music should be none other than the glory of God and the refreshment of the soul.”

Wolfgang Amadeus Mozart was the youngest of 7 children but 5 of those children died in infancy. Thus, he was particularly close to his older sister, Maria Anna Mozart, nicknamed Nannerl.

His father, Leopold was a composer, music teacher, and the fourth violinist in the royal courts at Salzburg.

When Nannerl was 7, her father gave her keyboard lessons, while her three-year-old brother watched.

“. . . In the fourth year of his age his father, for a game as it were, began to teach him a few minuets and pieces at the clavier . . . He could play it faultlessly and with the greatest delicacy, and keeping exactly in time. . . . At the age of five, he was already composing little pieces, which he played to his father who wrote them down.”

The Mozart family made several European tours during which Wolfgang and Nannerl performed as child prodigies.

Mozart went on to compose more than 600 compositions in his lifetime in a wide variety of musical styles.

Click HERE to listen to Mozart’s Sonata #16 in C Major.

Mozart’s musical talent brought him wealth and fame. He was considered by many to be a genius but he said, “Neither a lofty degree of intelligence nor imagination nor both together go to the making of genius. Love, love, love, that is the soul of genius.”

In spite of all the attention he received throughout his life, Mozart was not easily swayed. He said, “I pay no attention whatever to anybody’s praise or blame. I simply follow my own feelings.”

True to the customs of his day, Mozart was also buried in an unmarked grave – or perhaps one with a wooden marker – but nothing lasting.

The burial took place at St. Marx Cemetery. Very few people attended – not even his wife. This too was typical for the time.

Eventually, St. Marx Cemetery became a park and in 1859, a monument was erected to mark Mozart’s burial place.

In commemoration of the 100th anniversary of Mozart’s death, that monument was moved to Zentralfriedhof (Central Cemetery) in Vienna and placed in a cluster of musician’s gravesites.

And who is buried just around the corner? One of Mozart’s greatest admirers – Beethoven.

Do you know of anyone that is buried in an unmarked grave? Perhaps one of your loved ones or ancestors?

Click HERE to learn how to use a whiteboard, chalkboard, or piece of paper to record the names and dates for the gravesite. Then take a picture of it with the BillionGraves app.

Would you like to get started taking photos of gravestones to help others find their ancestors and grow their family tree? Just click HERE. It’s easy and it’s fun!

You are welcome to do this at your own convenience, no permission from us is needed.

If you still have questions after you have clicked on the link to get started, you can email us at Volunteer@BillionGraves.com. We’ll be happy to help you learn to use the BillionGraves app, find a cemetery that still needs to have photos taken, or plan a group project.

After all, our own ancestors deserve to have a legacy and let their own “last note linger” too.