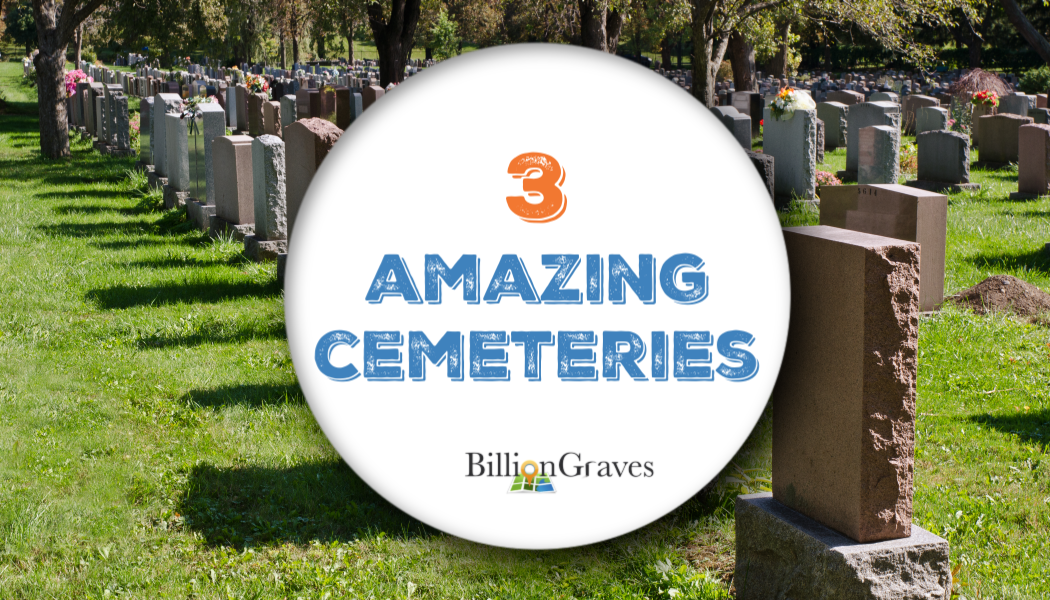 These three amazing cemeteries are not only the final resting place for almost a million people, they are fascinating places to visit.

Cemeteries around the world are gaining popularity as tourist attractions and destination points. In recognition of this, many cemeteries are planning visitor events and turning their grounds into park-like settings.

As the 10th largest cemetery in the world, Crown Hill has more than 200,000 grave sites and adds about 1,500 more per year. The cemetery grounds span 555 acres (225 hectares). Crown Hill Cemetery has served generations of Indianapolis area families for more than 150 years.

Founded in 1863, Crown Hill was incorporated as a non-profit, non-denominational, and non-sectarian cemetery with 30 members on its Board of Directors.

In 1984, The Crown Hill Heritage Foundation, a nonprofit corporation, was established to raise funds to preserve the cemetery’s historic buildings and grounds. Crown Hill Cemetery was added to the National Register of Historic Places in 1973.

Crown Hill Cemetery is actively involved in serving the community.

Music of Night concerts are held seasonally every Thursday, Friday, and Saturday.

Crown Hill encourages runners to work out at this amazing cemetery and even have published mapped exercise routes of one to five miles. The cemetery hosts organized exercise events such as 5K runs and 1.5-mile family strolls. It’s not hard to find a new route each day since Crown Hill has 25 miles (40 km) of paved roads.

The cemetery offers a wide variety of themed tours including:

Crown Hill is the final resting place for people from all walks of life, from politicians to poets and from children to criminals. There are more than a dozen US governors buried here, 3 vice-presidents, and many congressmen and senators.

The U.S. Civil War left its mark on Crown Hill Cemetery. A Confederate Plot was established within the cemetery in 1931 as a memorial and final resting place for 1,616 unknown Confederate Soldiers. Most of the soldiers buried there died at Camp Morton, a Union prison located on the north side of Indianapolis. Also within the cemetery is a National Cemetery for deceased Union soldiers.

More than 50,000 people visit Crown Hill each year, many just to enjoy its beautiful park-like setting.

The Crown Hill Heritage Foundation says, “When you pass through the gates of Crown Hill Cemetery, you’ll be awestruck by the majesty of nature.” I agree!

There are 4,156 inventoried trees, all plotted on a tree map.

The setting is so peaceful that animals flock to the area. I took this photo of a deer among the gravestones as I helped document this amazing cemetery with the BillionGraves app as a volunteer during an Eagle Scout Project.

Founded in 1894, the Zentralfriedhof Cemetery, the 9th largest cemetery in the world, covers more than 620 acres (250 hectares). There are more than 330,000 interments here, almost twice the number of living residents of Vienna.

Zentralfriedhof Cemetery, also known as Central Cemetery, is the final resting place for some of the world’s most famous composers including Ludwig van Beethoven, Franz Schubert, Johann Strauss and Johannes Brahms.

When Central Cemetery first opened it was not a popular place to be buried. The Viennese felt that was too far from the city to make it convenient for visits. So city authorities had to think of ways to make the land they had spent so much money on more attractive.

Eventually, they devised a plan that appealed to the music-loving citizens of Vienna: graves of honor for notable musicians. Some of the famous musicians were even re-interred from other cemeteries.

Zentralfriedhof is so large that it has its own railway station and bus service inside the cemetery itself. To keep the traffic down, automobiles must pay a toll fee to drive on the grounds.

One of the best ways to see the beautiful grounds is to take advantage of the cemetery’s horse-drawn carriage ride tours.

Zentralfriedhof Cemetery is inclusive of people of all of the world’s religions. There are dedicated areas in the cemetery for adherents to Judaism, Islam, Buddhism, and various Orthodox and Christian denominations.

It is traditional for Islamic people to be buried wrapped in shrouds, but they are buried at Vienna’s Zentralfriedhof according to Austrian law, in coffins.

The Protestant section of the cemetery consists of 6,000 graves and 300 family vaults. The first Buddhist burial grounds in all of Europe was established at Zentralfriedhof in 2005.

There have been two Jewish sections established within the cemetery, though the first was destroyed by the during the Kristallnacht. Currently, there are more than 80,000 Jewish burials.

In 2009, The Church of Jesus Christ of Latter-day Saints in Austria dedicated a hectare-sized plot of land to be set apart for the burial of their deceased at Zentralfriedhof.

Soldier buried at Arlington came from the fronts of Iraq and Afghanistan, World Wars I and II, the Korean conflict, Vietnam, the Cold War, and America’s Civil War.

Tomb of the Unknown Soldier

One of Arlington National Cemetery’s most well-known historic sites is the Tomb of the Unknown Soldier. It is a tribute to unidentified fallen soldiers who fought in World War I, World War II, Korea and Vietnam.

It is a large white sarcophagus that is guarded 24 hours a day, 365 days a year by Tomb Guard sentinels from the elite 3rd U.S. Infantry Regiment. The U.S. Army is entrusted with the responsibility of caring for this entire amazing cemetery.

The Tomb of the Unknown Soldier is part of the Arlington Memorial Amphitheater. The amphitheater is used for state funerals as well as Memorial Day, Veterans Day, and Easter ceremonies. Every year about 5,000 people attend these holiday commemorative events.

Authorized by the U.S. Congress in 1913, the Memorial Amphitheater was constructed of Imperial Danby marble from Vermont and Botticino stone imported from Italy.

President Woodrow Wilson laid the cornerstone which contains 15 items including a Bible and a copy of the U.S. Constitution.

More than 9,000 funerals per year are conducted at Arlington National Cemetery.

In the morning, flags are raised and flown at half-mast from a half-hour before the first funeral and they remain in place until a half-hour after the last funeral of the day.

Arlington has about 3 million visitors arrive to pay their respects each year. Many of the visitors take the interpretive bus tours provided at Arlington.

Each day a bugle call known as “taps” is played at about 15 military funerals. Taps is a tune that was composed during the American Civil War.

In July of 1862, while the Army of the Potomac was camped near Harrison’s Landing in Virginia, Brigadier General Daniel Butterfield summoned Private Oliver Wilcox Norton, his brigade bugler, to his tent with a request.

Butterfield did not like the plain lights-out call in use at the time, so he whistled a new tune and asked the bugler to play it. Norton repeated the 24-note tune, which Butterfield then ordered would replace the regulation Army Taps within his brigade.

Word spread quickly of the new tune and by the next day buglers from other brigades came to learn the new call, which would eventually replace the Army Taps.

It had been traditional, up to the start of the Civil War, for a traditional three-rifle volley to be shot off at military funerals. Shortly after Butterfield composed the new tune, a Union cannoneer was killed in action. The cannoneer’s commanding officer felt that the three-rifle volley could be interpreted by the enemy to be an attack, so he ordered the new bugle tune to be played instead.

The new taps tune has been played by the U.S. armed forces ever since – at military funerals, the end of each day, and during flag ceremonies. If the service member dies with honors the sounding of the Taps is accompanied by the three-rifle volley as well.

The name “Taps” came from the fact that the military lights-out call was traditionally followed by three drum taps. Taps is a tune that lingers in the hearts of many of Arlington’s finest.

BillionGraves would love to have YOU help take photos of gravestones in cemeteries around the world or from wherever you call home!

Take Photos of Gravestones with Your Smartphone!

BillionGraves’ goal is to preserve cemetery data and make it readily available for genealogical research to honor our ancestors and loved ones. Then, even if a loved one’s gravestone is damaged or worn by time, the invaluable information recorded at their final resting place will still be available.

As you take photos with the BillionGraves app, each gravestone is automatically marked with a GPS location. The data is then made readily available at BillionGraves.com for free for millions of families around the globe for generations to come.

1. Download the BillionGraves app to your smartphone from your app store.

2. Create a free account on the app or at BillionGraves.com.

3. In the app, click on “take pictures” to begin taking photos at any amazing cemetery. The GPS coordinates will automatically be recorded. Just check the BillionGraves website or app first to determine if photos have already been taken there.

4. Go up and down the rows, taking pictures of each gravestone until you have completed an entire section or the entire cemetery. Keep moving at a quick pace. If you take 1 photo every 15 seconds you will have taken almost 250 photos in an hour!

5. When you are finished, connect to Wi-Fi and tap on the “X” in the corner of your screen. When the orange button that says “upload” appears, tap on it to submit your gravestone photos.

Linking Photos with the BillionGraves App

If a gravestone has data on more than one side (for example, parents on one side and children on the other side) there is a way to link them together. Just click on the chain icon in the corner of your screen between each photo that you would like to link (front side, chain icon, backside).

You can use this linking feature for obelisks that have data on four sides. You can also use it to link a large gravestone with a family surname on it to nearby smaller gravestones with the family member’s first names on them.

Find a Cemetery to Document

When you are finished taking photos for the day, you can upload your photos right at the cemetery, if you have unlimited data, or you can wait until you connect to Wi-Fi to upload them.

From the app’s camera screen, click on the “X” in the corner of your phone screen. An orange button that says “upload” will appear. Tap it and your photos will automatically be sent to the BillionGraves database to help families find their ancestors and bless generations to come!

We hope you have some amazing cemetery adventures, exploring history, sculpture, architecture, and nature wherever you live.

If you would like to take gravestone photos, click HERE to get started. You are welcome to do this at your own convenience, no permission from us is needed. If you still have questions or concerns after you have clicked on the link to get started, you can email us at Volunteer@BillionGraves.com.