Today some of us went to out to test the Android app and some updates to the iPhone app (both are looking sharp, and it shouldn’t be too much longer before we can release them). On our lunch break we shuttled to the Orem Cemetery, scoped out a section that seemed reasonable, and each picked a row of headstones to start on.

After someone finished a row, they’d leap-frog everyone else’s rows and start the next one. Since Android devices generally take photos even faster than iPhones, we were all moving along as a fast clip. Because of the position of the sun, we didn’t have to worry much about our shadows getting on the stones, there were no grass clippings obscuring the names and dates, and most of the Memorial Day flowers have been removed, so they weren’t blocking anything either.

We’ve realized that turning the Auto Upload setting off (you can do this in your Settings menu) extends the phone’s battery life. When the phone is constantly updating the GPS to ensure the most accurate coordinates the cell service will provide, it’s already working pretty hard. But with the Auto Upload off and our simple organization, we finished our section long, long before we needed to use the car chargers we brought with us. Fifteen minutes after we started, there were almost 550 new photos for BillionGraves.com, and we’d done more than the section we’d initially targeted.

Admittedly, there were a few of us who were racing to see who could get the most photos before we finished, so that added to our speed, but most of us were going at a casual pace through the headstone rows. We were going to take some time to demonstrate tips for taking fully legible photos, but the environment at Orem Cemetery was particularly cooperative today and we didn’t need to get too creative. But I’ll point out a few do’s and don’ts and then mention a few other things we’ve found helpful.

The first image below is a picture I took before I cleared the headstone. It may seem a little obvious that the important things on this stone aren’t being recorded by the picture. After all, half of one person’s name is covered by a flower pot. But when you’re moving along at a quick clip, sometimes you forget to treat each stone individually; you forget to make sure each one is legible. This has been the case with a few photos that have been uploaded to BillionGraves.com. The second photo shows the same headstone, but with the flowers moved off the stone and far enough away that the shadows won’t make it difficult for a transcriber to read. 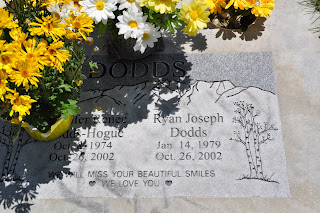 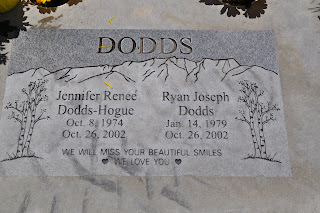 Speaking of shadows, you should always try to keep your own shadow off the stone. The photos below show another headstone, one with the photo taken incorrectly and one taken correctly. Both of these photos are at least somewhat legible, even with the shadows, because we had some favorable light today. But there are other days (and times of day) that aren’t so friendly, and shadows can come out as a solid black mass marring the headstone. Even when they don’t, it’s a lot easier to read an un-shadowed headstone. 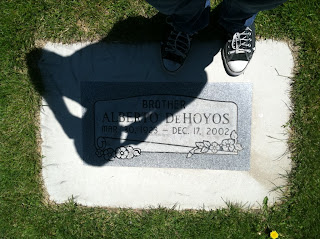 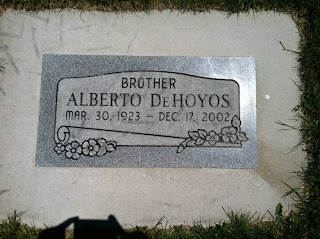 Sometimes you’ll have to take a photo upside-down to keep your shadow off the stone, but you can always rotate it afterwards either in the app or on the website (sometimes we take the photos upside-down if one stone is oriented differently than the rest in a row—it lets us keep our rhythm).
Another way to handle unfavorable shadows is to make sure the entire headstone and your phone are in the shade. This can be a little tricky—for us it typically involves two people standing next to each other to create a large enough shadow and then holding the phone within the shade (it would probably be easier if we just remembered to bring an umbrella). If the phone and the headstone are in the same patch of shade, the photo’s exposure and contrast will be set up for the lighting within the shadow, so it will be uniform and legible.
Organizing group trips is our favorite way to collect headstone photos. If you’d like to organize a group to map out one of your local cemeteries, get your fellow family historians together and pick a date—then let us know if you want us to announce the trip on our Facebook and Twitter accounts to you can meet up with other BillionGraves users in your area. Afterwards, tell us about your experience and let us know a little bit about your area, or about some of the people whose headstones you collected. We’d love to share your story and your cemetery with the rest of the genealogical community.
Tags #android #iphone #new photos #new records #tips
Release Notes

In a Dozen Days

BillionGraves in the News